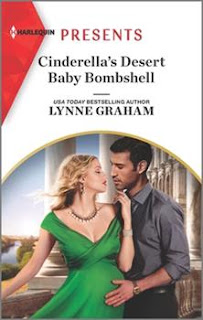 Lynne Graham is one of my favorite HP authors and her books make sigh dreamily. I don't even like sheikh stories, but I really enjoyed this one.

Prince Saif has to get married in order to make his ailing father happy and his father had chosen the granddaughter of an old friend from England. Saif was abandoned by his mother when he was a toddler to run away with another man, so it was his father who raised him. Ergo, he has mommy issues.

The bride is Tatiana who has a cousin named Tatiana. Ana doesn’t want to marry a man she’s never met, so she persuades her cousin Tati to take her place as a distraction while she runs away back to England to be with her boyfriend. Tati goes through the pampering and makeover that a princess bride deserves, but when she gets to the ceremony, the groom’s father insists that they get married anyway and Tati’s evil uncle threatens to cut off the funds to Tati’s mother’s nursing home if she doesn't marry Saif.

The two of them end up getting married and Saif tells her they'll only be married from six months to a year, so she might as well get the best of it and live in the life of luxury while they're married. Of course Saif dismisses her as a gold-digging tramp. They go to Paris for their honeymoon and Saif sends her on a shopping spree. Outraged that he called her a gold-digger, Tati decides to spend a ton of his money, while out shopping, which works out because she doesn't really have the wardrobe of a princess as she'd been living as a poor relation all her life.

Though they initially clash, the two of them end up having sex and Tati proposes a “friends with benefits” type of relationship which suits Saif just fine. They have lots of fun in Paris, getting to know each other, and getting more intimate for three weeks, until Tati has to go back to England as her mother has fallen ill.

In England, Tati discovers she’s pregnant and is reluctant to tell Saif because he's been insistent on their marriage having a termination date. When she tells him, he is adamant that they stay together for the sake of the child. At the same time, Saif is suspicious of Tati since his abandonment issues make him mistrust all women. He thinks Tati might run away, too. Meanwhile, Tati doesn’t want to stay in a loveless marriage just for the sake of a child as she is convinced she can take care of the child just fine.

However, Tati cannot be allowed to leave while she’s pregnant because she might be carrying the heir. She and Saif argue back and forth about what to do, while Tati’s scheming relatives get back in the picture.

Ana, Tati’s cousin, who ran away from the marriage, is now jealous that Tati is literally a princess and she would like it very much if Tati got out of the way so she and Saif can be together. Hilarious. It’s hard to be even mad at her because she’s so clueless.

There’s really not much to say about this book as it was pleasant, but not really all that memorable. I liked the heroine and to my surprise, I liked the hero, too, even though he was kind of a dick in the beginning.