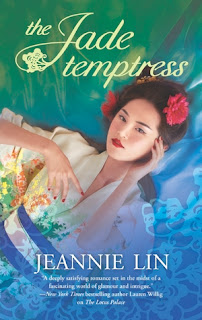 This book is the sequel to “The Lotus Palace” and this time the story focuses on Sun Mingyu, Yue-ying’s elder sister, and the head constable who prosecuted her in the last book.
Mingyu is a beautiful, sought-after courtesan who lives in a classy, upscale brothel where she commands the highest price among all the women. In the last book, she was accused of murder and had to go to jail (for a day) and her jailer was Wu Kaifeng, the head constable. At the start of the story, Mingyu is found by Wu Kaifeng in the mansion of her old lover, General Deng. The general is dead—decapitated—and Mingyu is the first one to find him. Of course, Wu Kaifeng comes to investigate and finds Mingyu there with blood on her clothes.
This is an Ancient China version of the old “cop and the whore” trope. Wu Kaifeng is exacting and unyielding, while Mingyu is the epitome of sophistication and a hedonistic life. Mingyu decides she doesn’t hate Kaifeng after all and in fact rather fancies him. Kaifeng is skeptical of her, convinced she’s trying to manipulate him into something because she is a well-known manipulator and seducer of men.
The difference between the two characters is obvious: Mingyu loves poetry, mingling with the upper echelons of society, and being admired. Kaifeng, however, is brute force and muscle. But the attraction between them is heady and immediate. While we had to wait for the romance to bloom in “The Lotus Palace,” the two protagonists get together hot and heavy almost right away.
However, not everything is cozy because Mingyu has a high-ranking official who is obsessed with her and will stop at nothing to have her. There’s also the murder of General Deng, which turns out to be more complicated than initially believed.
Mingyu is a very strong character. She is witty, driven, clever, and sophisticated. She is good at manipulation and getting men to do what she wants them to. Though Mingyu appears to have all this freedom, she is actually an indentured slave to the Lotus Palace and too valuable for her owner to allow her release. Kaifeng is poor, doesn’t make a lot of money, and owns an old dilapidated tea house that he’s fixing up to be his home.
The previous book’s protagonists are here, too. Both Yue-ying and Bai Huang are instrumental in solving the crime and securing the freedom of Mingyu and Kaifeng. I thought the book was overly reliant on Bai Huang and his deep connections in the government. You’d have to read the first book to fully understand what’s going on with this book. I was also disappointed with the resolution of the murder. It was a little anticlimactic. After all Mingyu and Kaifeng go through, the mystery of the general’s death evoked a “that’s it?” feeling in me.
But unlike the first book, the mystery aspect is interwoven into the story. In the first book, the mystery seemed slapped on, like if you’d removed the mystery aspect, you’d still have a story about a nobleman falling in love with a servant. In this one, it’s the murder that brings Mingyu and Kaifeng together.
I thought Mingyu’s reason for not running away with Kaifeng near the end was valid. She’d lived in a pleasure house since she was twelve and it was the only life she’d known. Even though she is actually an indentured servant, she had a certain freedom and enjoyed luxurious things. She feared that her relationship with Kaifeng would fail if all the passion between them were to dissipate.
Kaifeng comes from a very humble background—he was the foster son of the village physician, as his parents died when he was very young. Kaifeng later encounters trouble in his old village, so he moves to Changan in hope of a new, better life.
The descriptions are beautiful and lush as the first book. It’s easy to imagine what life in the Tang Dynasty would be like. I love the way Jeannie Lin writes because she immediately drew me in. I finished this book faster than I did the first one because I was just so intrigued by the story of Kaifeng and Mingyu. I thought they were a really good couple with just the right amount of push-and-pull.
There’s not really a lot of angst surrounding their relationship except the whole murder thing. Both Kaifeng and Mingyu are strong characters and I enjoyed how assertive and gutsy Mingyu is. I also really liked Kaifeng’s view of Mingyu and the progression of their courtship. Kaifeng was a “just the facts, ma’am” character, but Mingyu discovered the beating heart underneath.
The only thing I was disappointed about was the resolution of the murder mystery. I thought it was a little weak. Otherwise, I really enjoyed this book. I give it a 3.5 out of 5.
Ancient China cop hero historical romance murder mystery prostitute heroine