The Secret that Shocked Cinderella by Maisey Yates 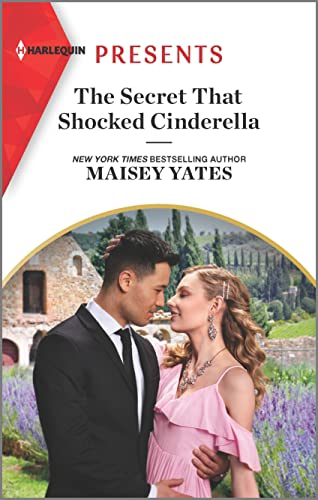 Our heroine Riot (wacky name, boring personality) lives in a small town in Georgia and works as a waitress. Her free-spirited roommate invites her to go to Cambodia and explore some ruins along with her wacky (read: unreliable) friends. They go to Angkor-Wat (which I thought was in Malaysia) to have spiritual experiences (consequently, my favorite movie “In the Mood for Love” features Angkor-Wat, which is how I know it's in Malaysia) and so-called friends ditch her while she's out exploring around.

Of course it rains, so she seeks refuge in a temple and there just happens to be a ridiculously hot Cambodian dude there named Krav. The first time she sees this man, she's thinking “tiger” which means predator who could eat her. He offers to take her to his tree house in the forest and she’s like, “Yep, sign me up.” Girl, this guy could have been a white slaver. You crazy.

Anyway, he takes her to his tree house which turns out to be mansion and he says “let's get you out of these wet clothes.” Afterwards, they sit down together and have tea. He tells her his mom died and she sympathizes. Then they get their sexin’ on the double. Yeah, it happened real quick.

Would I go with a gorgeous stranger in a foreign country back to his house and immediately get it on with him? Ah, shit, probably. I have the brains of a Harlequin Presents heroine.

The sex is fabulous, of course, so Riot decides she's going to have her own vacation and stays with him. He’s wildly rich, so he takes her all over Europe, bumpin and grindin the whole time.

Riot knows it can't possibly last forever, but she still falls in love with the guy even though he indicates he's not really into relationships. Lo and behold, she gets pregnant and he overreacts, so she runs into the rain and trips over a rock and hurts herself. They both think she had a miscarriage, so she leaves him and goes to live somewhere else without him following her.

But as it turns out, she’s still pregnant and now she lives in Northern England as a cartoon American until one day, she gets run over by car (truck-kun!) and has to go to hospital. Meanwhile, Krav has been stalking her all this time and goes to pick her up while she's in a coma.

Amnesia alert! Riot is in a coma for a month, during which she has the baby. When she wakes up, she's been living in a villa in Italy and she's got a baby. The problem is, she can only remember up to the point before she meets Krav, so she doesn’t know who he is.

The secret that shocked Cinderella? Krav is half-Italian!

Krav takes advantage of Riot’s amnesia and tells her they're about to get married even though Riot actually hates him. He implies they’re in love and takes her to nice places and proposes to her in front of the Eiffel Tower under fireworks. The scumbag!

Krav’s issue is he thinks he's dead inside because of the way his father raised him. He is the result of his father’s affair with a Cambodian woman and is ripped from her arms when the father needed an heir. His dad raises him to be tough  and self-reliant, without the benefit of love. In short, Krav thinks love is for idiots and he'll never ever fall in love.

Until he meets Riot and becomes obsessed with her.

After having sex one rainy  night, Riot suddenly remembers everything. The secret that shocked Cinderella? Krav isn’t in love with her and basically rewrote the story of their relationship. He removes all the parts where he acts like a total dirtbag. So of course, Riot gets mad at him because she had purposely left him and lived in Northern England for several months so he wouldn’t find her.

Krav is one of those heroes who think building a relationship with a woman is a waste of time because he has to build up his business and think of nothing else. He was torn away from his mom's arms by his father and raised without love. Therefore he’s a hard, unyielding man.

Do I buy it? Sure, he never had a role model on how to be a decent human being, so he acts like a jerk all the time.

There's this part of the book where he touches his daughter for the first time (he's been avoiding her) and she squeezes his finger in her tiny fist and I was like awww.

Riot is a serviceable heroine, feistier than your average HP lady, though the first half of the book, she was a bit more passive and just allowed things to happen to her. In the latter part of the book, she takes charge of the situation and goes after what she wants.

I enjoyed most of this book. I liked the lush description of the jungle in the beginning. Hero is appropriately angsty-brooding. This one is going on the “meh” pile because ultimately, I wasn’t riveted enough to finish the book in one sitting. That's my definition of an exciting book.