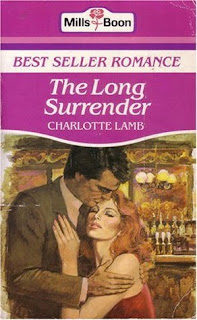 The Long Surrender by Charlotte Lamb
My rating: 2 of 5 stars

Ugh…and yet another vintage romance novel where the so-called hero gets a little slap-happy and is a little too fond of calling our heroine “a little bitch.” This, by the way, after he finds out she was sexually assaulted and regularly beaten by her stepfather as a young girl, which is the reason she’s not too welcoming of the hero’s sloppy attempts to get in her drawers and make her “surrender” to him. Does he slow down and give her time to adjust to him even after his great revelation? Nope. Full speed ahead for this bucko. Dickhead.

Selena West lives in London and supports herself as a sought-after lounge singer, having been divorced from her husband Ashley Dent some years ago (Selena West and Ashley Dent—sound like Batman villain names). Her only family is her brother Roger, who has a severe gambling problem and often comes to her to save him from financial ruin. Selena is trying to forget that she was ever married to Ashley, since the whole thing was a disaster—she was in love with him, but couldn’t stand to be touched him, especially because his passion for her was super intense. She’s still in love with him after all of this time, which is why when she receives news that Ashley died in a plane crash, she collapses in grief. But of course Ashley never got on the plane and he’s totally alive. Selena sees him while she’s performing on stage and almost passes out again because she think she’s seeing a ghost and Ashley gets pissed that she’s stripping off her gloves as part of her act and the mostly male audience goes wild for it. Selena practically runs away to the dressing room where Ashley barges in and demands she go to dinner with him, while Selena is gaping at him like a fish and is like, holy shit, I thought you were dead. Already Ashley is demanding all sorts of things from her just like he used to in the very brief time they were married, while Selena is still staring at him in shock and is like, hi, can I have a moment while I get over the fact how very dead you’re not? And Ashley’s like, yeah, whatever, can you hurry and deal with it, so we can bone now? Oh, and BTW, Selena? You’re still the same cold bitch I married years ago, but I’ve never gotten over you and if it’s all the same to you, I’d like to continue you harassing you about sex like we never broke up, okay? Of course, Selena tells him thanks but no thanks and to get out of her face. Forever would be great, Ashley, thanks. Bye.

But obviously, Big Dumb Roger is going to need a lot of money getting out of his gambling debts or some real bad hombres are going to kill him, so who has a lot of money and can get him out of this trouble right quick? Mr. Ashley Dent to the rescue. All he asks in return is Selena’s sweet, sweet company and that means her sweet, sweet ass. Selena tries to make Roger realize that she’d be prostituting herself for him and Roger basically just shrugs and says, yeah, okay, pony up. Selena thinks this is a simple transaction: she’s going to be Ashley’s mistress and in turn, he’d pay for Roger’s debts, but things aren’t that simple. Ashley doesn’t want Selena as his mistress—he wants to marry her again and this time, he means to keep her. Selena just kind of gives up at this point and figures she’s never going to get away from Ashley because she loves him and has never stopped loving him. As a matter of course, she marries him again and they move to the Caribbean.

In the Caribbean, Ashley keeps Selena prisoner in his beach house and tries everything short of brute force to seduce Selena into bed, but she is too damaged, although Ashley doesn’t recognize it. He even knows the truth about Selena (she hasn’t told him anything, but he made Roger tell him everything before they left London), but for some reason, he seems to think she can push past it and get over it on her own. When he’s tender with Selena, she becomes more amenable to him and begins to accept his affection, but like a teenager with a roaring hard-on, he just can’t get ahold of himself and whenever Selena starts to withdraw from being overwhelmed, he’d get violent with her and call her names. He doesn’t seem to understand that Selena was severely traumatized as a young girl and no amount of sexual healing is going to fix her because he lacks the patience and the comprehension. He thinks he needs to get her to surrender because she hurt his pride by making him beg for her all those years ago, but what he really doesn’t get is that IT’S NOT ABOUT HIM. She is profoundly damaged because of a deep-seated trauma that has nothing to do with him AT ALL and he is just making it worse by adding more and more pressure to it each time.

It comes to a head when the prosecutor who savaged Selena in court and made her look like a liar finds her in their island paradise. It turned out he’d become obsessed with her and had been looking for her all this time to apologize. Of course, Ashley is super jealous of this guy and thinks Selena is having an affair with him—he accuses Selena of having affairs with everyone. Unbeknownst to Ashley, Selena had developed an obsession of sorts with the prosecutor, too. She’d been reliving that day in court over and over in her nightmares for several years and had somehow develop a pseudo-sexual fascination for him. While Ashley is away after storming off on a tantrum, the prosecutor goes to the beach house to confront Selena. The two of them have a long, cathartic talk and Selena finally tells him she forgives him. The prosecutor tells Selena he’ll always be around if she ever needed him and Selena says goodbye. She watches him leave, feeling numb and detached from everything, not wanting to feel anything anymore. She wanders toward the water, relaxes into it, AND TRIES TO DROWN HERSELF. OMGWTFBBQ!!!

To get away from you, Ashley!! You’d think this would get Ashley to soften up toward Selena because when he hauls her out of the ocean, Selena—out of her mind and drifting in and out of consciousness—begs him, “Don’t hurt me anymore, Ashley. Please don’t hurt me anymore.” What kind of monster wouldn’t ease up on the poor woman after an entreaty like that? Ashley Dent, that’s who. But no, Ashley keeps up with his shenanigans, using other women to make Selena jealous, keeping her prisoner in their London home, and acting like an all-around dickbag to her. It’s a wonder that Selena doesn’t reattempt her suicide. Ashley is a real winner of a husband. But Ashley insists that Selena really hurt him the first time around when they were married because she didn’t tell him the truth about what happened to her and shut him out and because of that Ashley spent the last three years suffering, and obviously, it’s all Selena’s fault. Ashley, Ashley, Ashley, it’s STILL NOT ABOUT YOU, you selfish windbag! And he hits her! HE HITS HER! Enough with the hitting. That’s not hot…unless it’s consensual. Wink.

Ugh, this book made my heart hurt. I’d basically read anything Charlotte Lamb has ever written—even about paint drying, but the ones where the heroes are really mean and are little too free with the slapping are NOT OKAY with me. I almost threw the book against the wall a couple of times, but I was riveted with every page. That’s the power of Charlotte Lamb, I guess. Ashley Dent, however, is one Harlequin Romance Hero™ I can do without, thank you very much. And Selena…oh, poor Selena. This is one pairing I cannot abide. They shouldn’t have gotten together. Selena needs years and years of intensive therapy and Ashley… Ashley needs to be put in a burlap sack and dropped in the South China Sea where he can be eaten by sharks.

The Secret Virgin by Carole Mortimer My rating: 2 of 5 stars I admit I picked up this book because I was tantalized by the title and had hoped that the aforementioned virgin was the hero because I’ve grown weary of heroes who have screwed half of the Eastern seaboard and most of the French Riviera and doesn’t hesitate to screw the heroine without protection. That’s just bad manners. Why is it the heroine who’s always the virgin? I can write a whole book on that alone. There’s something about virginity that’s always guaranteed to thaw the hero’s cold heart and bitter cynicism that all women are whores, except this one good one with a pure heart and a unicorn vagina. Virginity separates the whores from the whore-nots. That’s in the Bible or something. Trust. Tory Buchanan is asked by her friend, the famous actress Madison Famous Actress , to pick up her brother Jonathan Mcguire , an American, from the airport. He will be staying on a holiday at Madison’s house on the Isle
Read more

TRIGGER Warning. This is my first ever review of a web fic novel. Written by Niño Noel Manalo, "Prince of the Womanizers" (which is in Tagalog), this romantic comedy novel is set in the Philippines and starts out when the two lead characters are in their teens. Word of warning: The male lead Aivan Marcus Gonzales is a dick. If you are not a fan of asshole heroes, stay clear of this one. However, if you're a bit of a masochist like me and curious as to how the writer can possibly turn a cruel, misogynistic, physically and mentally abusive fourteen year old boy who bullies his foster sister (which includes sexual molestation), then you're reading the right book. If you think this character should be boiled alive, skinned, then set on fire, then you're probably not going to enjoy this one. Now, a story like this can only really truly work if the female lead can give as good as she gets, but that only happens in the latter half of the book and our heroine
Read more

The Dominant Male by Sarah Holland My rating: 4 of 5 stars Gabriel Stone is one of those heroes we just love to hate on, but ugh, he ended up charming me, anyway, even though he is a self-proclaimed “proud chauvinist” and sexually harasses the heroine at every opportunity. If Gabriel Stone were an IRL character, he’d be one of the powerful men being currently brought down by the #Metoo movement and it’d be a shame because by the end of the book, he’d presumably become a reformed rake and going to be living a happily ever after with the heroine and in twenty-five years, have a handful of grown kids and touring the Caribbean with heroine in their giant yacht or something. But because he has to face all his accusers accrued over years of being a sexually harassing chauvinist pig, he’d probably lose a bunch of his money and the numerous court cases would put a strain on his marriage, and Rhiannon and the children would probably leave him. Good thing Gabriel Stone is not a rea
Read more