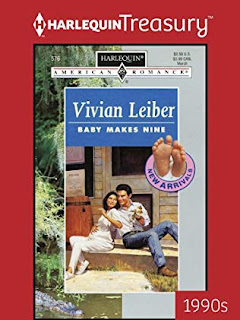 Baby Makes Nine by Vivian Leiber
My rating: 3 of 5 stars

It’s so hard to review this book on its face because it was very triggering to me as a Liberal American and there was a lot about the setting that raised my hackles a little bit and made me cringe a whole lot with the un-PCness and everything. Two examples: the heroine is desperate to gain the respect of her neighbors because she’s always wanted to be a member of the Daughters of the Confederacy and… she names her child after Andrew Jackson because he saved Louisiana… or you know, he slaughtered a bunch of Native Americans in the Trail of Tears, the motherfucker. Screw that guy, seriously.

Anyway, Jack Tower is some big-deal neurosurgeon in Boston who gets all the chicks and the accolades and I’m sure all the CNN interviews or whatever and he’s up for a very big promotion in his big fancy hospital, but first he has to fill a requirement that he never got around to doing before because he was so busy being ahead and advanced of everyone else, like a hot, smoldering, very heterosexual Doogie Howser MD. As a fulfillment of his fellowship, he’s supposed to serve as a physician in a poorly served area for a year, but he was so busy being Dr. Awesome all of these years that he never got around to it. His boss insists that he do this one-year service in some place he’s sure to hate and be snobby about and that’s the South. Jack growls and is an all-around dick about it, but his boss says you gotta do this or you’re not going to get your promotion or and it’s only for a year, Jack. What can happen in a year? Exactly. Jack goes to Louisiana and is neighbors with an attractive pregnant woman whose boyfriend just split after she told him she was pregnant and already has four kids of her own. That should be enough to send our commitment-phobe, dastardly doctor who hates associating with all poor, humble people, screaming into the night, but he’s got his own baggage. In fact, he has four.

As it turns out, Dr. Awesome is divorced and he has four daughters over the age of ten whom he sees so rarely that he’s not even sure what they look like. The first time he meets Becca, her kids are looking for a husband candidate for their mother because she’s knocked up and that’s not a good look for their little Partridge family musical business. It’s the Old South, after all, and the little old ladies don’t take too kindly to unwed mothers who bandy about the illegitimacy of their babies. Jack’s problem is this: he’s never had to take care of his kids, ever. Never had to change their diapers or nothing like that. He was always busy with the hospital and after he and his wife parted company, he didn’t really see much of his children. He was too busy with research and stuff and no time for love and all the messy emotions. When his ex-wife dumps the four girls on his doorstep and goes off to find herself in Tibet (man, Tibet must be so tired of rich white people just showing up in their hood to find themselves), Jack is at a loss about what to do with them because he’s never had to deal with them before and instead of finding his daughters a suitable governess to take care of them, he goes and proposes marriage to Becca because he needs a wife to keep his house and tend to his daughters.

What kind of brilliant mind comes up with a scheme of putting two families together just because a man doesn’t want to go look for a housekeeper and to nanny take over his responsibilities as a parent? Meanwhile, Becca is seeking legitimacy for her baby because she’s an unwed mother with four kids and the neighbors are starting to talk, canceling engagements with their musical troupe because they’re no-good trash. Of course, marriage is the answer! Jack tells Becca they can just easily get a divorce once his one year in the parish is up and they can all get on with their lives and Becca’s fifth baby won’t be a bastard. Since she marries a man who comes from a fine Boston family and apparently has good lineage, the old biddies in town start treating her respectfully and inviting her to join their fancy clubs like Daughters of the Confederacy and Daughters of the American Revolution. Becca is a fine Southern lady and she’s been left out of the most exclusive clubs till now because her family wasn’t wealthy and they didn’t have the Grand Wizards or whatever in their family tree. She knows it’s wrong to marry Jack because she’s attracted to him and nothing else and her two entanglements with men went to heck because neither of the relationships had much going for them, either. Jack is a cold, hard man, and he’s determined not to get involved with her and she knows all he wants from her is sex, and sex is what got her into trouble in the first place.

Jack is one hell of a guy. He has no compunction trying to seduce Becca even in front of her kids, even though he knows he’s going to leave after a year and she’s going to be devastated because she’s not the kind of woman who gets herself involved so easily with a man, then moves on. She’s a mother with kids and her whole life in her Podunk corner of Louisiana. But he doesn’t care about all of that. Jack just wants to get back to his research and his science and he’s tired of smelling the bayou. He barely even cares about his daughters and was calling around, trying to find a boarding school to stick them in, before he came up with the harebrained scheme of marrying Becca so she can be a step-mother to his FOUR daughters. FOR ONE YEAR. That is messed up. He wants to give them home and stability for one year, to get them out of the way, just so he can finish his residency in Podunk, then divorce the poor woman and yank the four daughters out of the home they’ve known for a year back to Boston, from whence he can dispose of them from his corner office. What a dick.

I wanted to like this story and did enjoy it in some parts, especially the ones where Becca is rehearsing music with her little band and some of the courting moments with Jack. I was a little too weirded about her closeness with her oldest boy, though. She discusses her sex life with him and that’s just… bizarre. I’ll admit that some of my prejudices may have also prevented me from enjoying this book all the way. Andrew Jackson… ptooey. And the whole set-up was just weird. This fancy, sophisticated big-brained doctor thought it would be a good idea to marry a pregnant lady with four kids already because he didn’t want to take care of his own damn four kids??? I mean, I guess they do it different in the South, but this dude is a Yankee… HE REALLY THOUGHT MARRYING BECCA WAS THE BEST OPTION?!? The lady has four kids and another on the way. He wants to dump four more kids on her? And this guy is supposed to be some top-notch brain surgeon, the best in the country. Where did he get all his degrees, the internet?!?