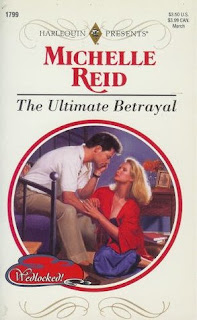 The Ultimate Betrayal by Michelle Reid
My rating: 5 of 5 stars

The one trope I always have a hard time reading is the Cheating Hero because I cut my reading teeth on Mills & Boon romance novels and I’ve been devouring them since I was a girl, so I developed this warped belief that for a romance hero, there is just one person and he’ll love that woman body, heart, and soul till his dying day. Yeah, I know, it’s not very woke because it’s all very cisgendered and heteronormative and mostly white, but we all sigh and cry and emote and laugh, because it’s all so beautiful and the stories take us somewhere else, somewhere in time for a couple of hours. I love romance novels, damn it, and that’s why I get so mad when my fantasy gets ruined by a hero who breaks the rules and falls in love with someone else.

Daniel and Rachel have been married for seven years and they have three children. Daniel owns and runs his up and coming investment company, while Rachel keeps house and home and takes care of the children. This is the way it’s always been since they had to get married when Rachel got pregnant when she was seventeen. Rachel accepts this and knows it’s just the way things have to be. But lately, Daniel has been staying out later and later and going on more out of town trips and Rachel is developing suspicions, though she won’t dare voice them out loud. One day, Rachel gets a call from her Mandy who confirms all of her worst suspicions and tells her that Daniel has been having a hot and heavy affair with his colleague Lydia. Rachel’s world immediately falls apart because Daniel is the only man she has ever loved and she has only really ever lived for Daniel and the children.

As it turns out, Daniel had been about to break up with Rachel back in the day because he felt she was too young for him (he was 24 and she was 17) and had actually accepted a job in a foreign country, just so he could get away from her, but of course he’d already slept with her (the dirty dog) and she’d gotten pregnant. Instead of leaving, he married her, and the two of them moved into a tiny apartment to make a life together. Daniel worked at building his company, while Rachel took care of their infant twins. Daniel tells Rachel that he was under a lot of stress at work and felt distant from her because she was focused on the new baby. Rachel’s last pregnancy was difficult on her body and she hasn’t been intimate with Daniel, who has a high sex drive. Daniel felt like he had no one to turn to and his colleague Lydia was willing and available, so he began to hang out with her. Rachel begins to realize that she and Daniel have been growing apart for years and she doesn’t know the man Daniel has become. Daniel doesn’t know her, either, because as Rachel herself is just starting to discover, she has wants and needs outside of Daniel and the children. As she points out to Daniel, she went from one set of parents to another—Daniel has been more like a father-figure for her over the years instead of a partner because he has never truly allowed her to make decisions for herself or grow as a woman.

Daniel and Rachel try to cobble together what’s left of their marriage, but don’t find it easy. Rachel finds herself wracked with insecurity because the new Daniel is so different from the man she used to know and loved before—he’s sophisticated, elegant, and cool. Meanwhile, she’s frumpy, has a mommy bod, smells like baby throw-up, and isn’t very educated. She can’t possibly compare to the Lydias and the Mandys of the world. None of that matters to Daniel, of course. He still wants her desperately and takes her to bed every night, though Rachel insists they keep the light off and can no longer respond to Daniel’s attentions like she used to. Daniel gets his rocks off, but Rachel can’t because she’s too insecure about herself and can’t forget that Daniel has recently enjoyed the company of another woman. As she tells him, she can forgive him, but she is having a hard time forgetting and it is majorly affecting their intimacies.

The problem between Daniel and Rachel is a profound lack of communication and understanding. Daniel never felt like he had a true wife and partner in Rachel because Rachel’s transition was girlfriend to mother. She’d never taken any interest in his company, which is their livelihood and what puts food on the table and the roof over their heads, and didn’t even know that the “hostile takeover” that had been worrying Daniel for nearly a year was over his own company—Rachel had believed that it was Daniel who was trying to take over another company. She never accompanied him to corporate events—no one at his work even knew he was married with kids (which is kind of on him—you’d think he’d mention he’s got a wife and kids). At the same time, WHO THE HELL IS SUPPOSED TO TAKE CARE OF THE KIDS YOU FOISTED ON RACHEL, DANIEL?! Daniel keeps insisting that Rachel get help and hire a live-in nanny for the kids, but Rachel wants to take care of the children and keep the house herself, probably because she feels it’s her only true contribution to the marriage. Daniel also wants a bigger house that’s more befitting of their improved station in life, but Rachel objects to it because she feels it’s another sign that Daniel is truly growing apart from her and becoming someone else. She just wants her little house with their little family, but Daniel wants things that are bigger and grander because he has bigger and grander dreams and feels stifled in their smaller house, like the walls are closing in on him.

I do have one gripe, though... can't a woman just have ONE true female friend, for Pete's sake? Rachel's BFF had to be the ULTIMATE backstabber, FOR REAL?!?! COME ON, man!

This is one of those Harlequin Presents that are as true-to-life and Real World as you can get. The hero and heroine have real problems. They are a couple who married too young when neither of them have fully matured into adults and grew apart over the years. One partner feels neglected because she feels the other isn’t contributing his fair share in the workload and not understanding her hardship throughout the day, while the other partner isn’t getting his needs met because he feels his wife is too busy with the kids to be a proper wife and they’ve both lost that lovin’ feeling, whoa that lovin’ feeling, and now it’s gone, gone, gone… whoa-oh-oh. I really liked this book despite my frustration with Daniel and how I wanted to kick him in the balls a few times. He was a real insensitive dickbag to Rachel a few times. Dude, YOU TOOK HER CHILDHOOD AWAY AND SHE DIDN’T GO TO UNIVERSITY BECAUSE OF YOU. But oh, when he was sweet, he was really sweet. And sexy. Good thing Rachel didn’t let him run roughshod over her. Rachel cried a lot, but she stuck to her guns and made Daniel own up to his mistakes. She was also able to recognize her own mistakes and make up for them.

The Ultimate Betrayal is a wonderful read because both of the characters seemed true-to-life and reacted in a way that made sense in a real-world way. Both Rachel and Daniel are likable and at the end of the book, their happily ever after was believable. I definitely recommend this one.