Review: Smoke in the Wind 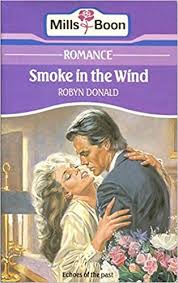 Smoke in the Wind by Robyn Donald
My rating: 2 of 5 stars

The hero Ryan Frane is infamous in the HP messageboards for being one of the worst heroes in HPlandia and with good reason: he is not a good guy. He is cynical, arrogant, selfish, and a proud chauvinist. You’re probably thinking that’s pretty standard for an HP hero, but Ryan does something that’s pretty unforgivable in the book: he falls in love with someone else and dumps the heroine. And that someone is the heroine’s cousin.

Venetia is an up and coming reporter in New Zealand when she meets Ryan who is a world-famous Kiwi who makes political documentaries that have been known to topple dictators and despots. The two of them hit it off immediately, but Venetia wants to play it cool because Ryan is a known playboy and a commitment-phobe. She was briefly married when she was eighteen since she got pregnant but the baby miscarried and the marriage was scrapped immediately and she hasn’t had a lover since then, but she wants Ryan to think she’s sophisticated and as fun-loving as he is and someone who won’t bog him down because she’s convinced she can get him to fall in love with her if she’s patient and plays it cool long enough. Meanwhile, Ryan believes the worst of Venetia because she’s young, beautiful, and successful, so she must have slept her way up the career ladder. Besides, he’s heard some vile rumors about her from men who don’t like her very much, so surely they must be reputable sources. Venetia brings Ryan around to meet her family and Ryan is instantly struck stupid by Venetia’s cousin Liz, who is demure, innocent, and beautiful like the Virgin Mary. In the restaurant bathroom, Venetia warns Liz to stay away from Ryan in a true evil villain fashion, telling Liz that Ryan belongs to her and she’s not afraid to fight dirty to keep him. But all of her scheming is for naught. After she gets back from an assignment that keeps her away from Ryan for sometime (she doesn’t mention to him that she had typhoid while she was away on assignment, by the way), Ryan is already head over heels in love with Liz and has every intention of dumping Venetia. He tells Venetia that Liz is perfect for him because Venetia reminds him too much of his mother who is too focused on her career and doesn’t really care about home and hearth. But that doesn’t stop him from having sex with her one last time because that’s just the kind of guy he is.

SPOILER ALERT!! THIS IS THE PART WHERE I REVEAL EVERYTHING!! Ryan marries Liz because of course he does, so Venetia runs away to Australia to live with her grandmother because she’s pregnant with Ryan’s baby and she doesn’t want anyone to know about it, especially not Ryan and Liz. Venetia helps her grandmother put together her grandfather’s memoirs and is able to compile enough material for a novel, which becomes an international best-seller. Six years later, Liz has died from leukemia and Ryan has come to Australia to seek out Venetia because he wants to make a movie from her novel and Venetia to write the screenplay herself. Of course, Ryan doesn’t know about her son John and Venetia wants to keep it that way because John is a secret baby. Venetia is outraged that Ryan has the audacity to show up after what he had done to her, never mind the balls to demand that she work with him. But John is right about at that age when he’s starting to question where his father is and why he’s not around and Venetia has no real answers for him.

Meanwhile, Venetia’s aunt, Liz’s mother, suffers a heart attack and is demanding that Venetia return to New Zealand to take care of her. The last thing that Venetia wants to do is be a Liz-substitute for her aunt or Ryan. It’s clear to Venetia, however, that she’s never stopped loving Ryan and that her son does need a father and that Ryan does seem to be willing to fill in the role, even threatening to sue for sole custody if Venetia doesn’t stay and marry him. Venetia is essentially trapped, but it’s not a trap that she necessarily wants to escape because for once, she has her aunt’s approval, Ryan’s attention, a father for her son, and the family she’s always wanted. She lost her parents at a young age and Liz’s parents had to take her in and she had to grow up with Liz, who seemed perfect in every way. She got pregnant, married, lost her baby, and then got divorced all when she was very young, while Liz remained intact, then Liz stole the only man she truly loved. She couldn’t even get proper revenge on Liz because the dumb bitch had to go and die of leukemia!

Ugh, and then there’s Ryan Frane. Ryan tells Venetia that his mother put her career above everything else, even her family, and she didn’t love him. He married Liz, he tells her, because he was afraid that Venetia was made in the same mold as his mother and she was going to place her career above him. Liz, he said, didn’t have those ambitions because she was a simpler person. Of course, that also meant that she didn’t have much in the way of highs and lows because she didn’t rage and didn’t understand passion and love the way Venetia and Ryan did. What Ryan wants Venetia to know, by the way, was that Liz had been about as deep as a petri dish and was only capable of projecting about as much emotional response as a houseplant. In short, Ryan made a mistake six years ago and realized it shortly after being married to Liz a few months and had been regretting it ever since. Surely, this should be the perfect place for Venetia to laugh in Ryan’s face, sock him in the jaw, and walk out of his life forever. But she doesn’t do that. **sigh** They never do.

As awful as Ryan Frane is, this particular HP was compulsively readable. I could not put it down. Maybe its reputation preceded it and I had heard about how cracktastic it was, but once I picked it up, I never set it down once. I read this thing from beginning to end in one sitting and oh my gosh, was it ever so angsty. I’ll admit, there were tears, okay? I cried a little because I got so mad at Ryan and I felt so bad for poor Venetia because she loved him so much and just wanted him to think she was cool and sophisticated, then he called her a whore and all sorts of bad names and I just… lost it, okay? She was all alone with her baby and he was married to Liz all that time and I was like, I can’t. And then she had to go and die of leukemia and leukemia is the worst. Ryan is also the worst. Nevertheless, I went through this book like a bag of potato crisps like I’m on my period and afterwards, I was sad and gloomy. Like I was on my period.