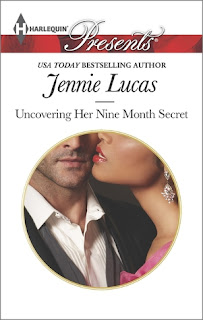 Uncovering Her Nine Month Secret by Jennie Lucas
My rating: 4 of 5 stars

I read “Nine Months to Redeem Him” first and the villain in this book is the hero in that one, so when I saw his antics in full display here, I was aghast that he would get a book of his own because he was frickin’ psycho in this one. He threatens the heroine, obsessively follows her around, kidnaps her—he’s rich, handsome, powerful, and the only difference between him and the hero is that the heroine doesn’t love him back, ergo he’s the bad guy.

Lena Carlisle is a Cinderella heroine who lived in the attic of her evil cousin, serving as her personal assistant slash slave, while the evil cousin plots to ensnare Alejandro Navarro, the last Duke of Alcazar, for marriage. As these things go, Alejandro takes one look at Lena and decides he wants her, instead, so he courts her and seduces her, and gets her pregnant. Claudie, the evil cousin, tells Lena that the she and Alejandro will be married and only needed Lena’s baby for their family to be complete, so that is why Alejandro seduced her. Meanwhile, Claudie tells Alejandro that she and Lena hatched this plan so that Alejandro will marry Claudie and Lena won’t let Alejandro see the baby unless he marries Claudie. To escape Alejandro’s wrath, Lena has run away with the help of a friend Edward St. Cyr, a ruthless billionaire who has been flying her all over the world so Alejandro won’t find her and her baby. Of course, Edward isn’t doing this for altruistic reasons. As he tells Lena, she needs to get over the Spanish bastard because it’s time that Lena belonged to him. Lena has been living in a house in Mexico managed by shell companies owned by Edward, but Alejandro has found her at last and forces her baby to take a DNA test and commands her to marry him.

Lena tells Alejandro she needs to go to London first before they go to Spain, so she could collect her legacy. Alejandro thinks Lena is just there to get money from Claudie or something—Claudie made Lena’s life to difficult, so she would move out and Lena wouldn’t get her inheritance from her grandmother—but then he discovers that her so-called legacy are actually a bunch of old family albums from her happy childhood with her parents. He also finds out while she was living with Claudie, she stayed in the attic and that she is beloved by all servants because she is very kind to them. Alejandro starts to realize that maybe he was wrong about Lena all this time and it was only due to Claudie’s machinations that they were torn apart. Lena tells him that she will stay with him and marry him, provided that he is true to her and won’t lie to her, but Alejandro says he can’t promise that he won’t lie to her now and in the future. Lena is broken-hearted because she doesn’t want to fall in love with Alejandro again, but he is so good to her and the baby, plus he has an adorable grandmother. What is he lying about? Does he have four dozen mistresses? Alejandro was adamant about not getting married and having kids before Lena got pregnant and he had told her so. She told him she loved him, so he panicked and left her. What is different now?

I’d never really come across an HP told from the first-person POV before, so this was definitely different. It kind of had a “Last night, I dreamt of Manderley…” feel to it. We even get a travelogue of Alhambra, just like the old-fashioned Mills and Boon novels, and that was neat because of the lush, flowing descriptions. Lena is not an annoying heroine and though she is susceptible to Alejandro, she seems to have her own mind. It’s also a nice change of pace because there is no head-hopping between the hero and the heroine and that’s one of the things that drive me nuts about reading the old HPs. This book reads like a Mexican telenovela complete with kidnappings, blackmail, and bitchy cousins. Lena is truly a Cinderella figure who was maltreated by her evil cousin, gets her birth-right stolen, and then swept off her feet by the dashing, handsome duke. She was even living in the attic. I wouldn’t be surprised if she had talking birds and mice that kept her company up there.

When I started reading this book, I thought it would go into some flashbacks of how Lena and Alejandro met and fell in love before evil cousin Claudie threw a monkey wrench into the mix, but there’s none of that. There’s not even a scene or two of her adventuring with Edward St. Cyr, considering he supposedly jetted her around the world in an effort to get her away from Alejandro. I thought maybe there was a previous book I missed or something and this was a continuation. I would have liked to see scenes of Edward and Lena forming a friendship because hey, why does she trust this guy so much? When Lena and Alejandro get to London, the first person Lena contacts is Edward St. Cyr, so he could help her get away from Alejandro. This guy basically drops everything on hand just so he could get to Lena and Lena didn’t believe that Edward had any feelings for her? Girl, a guy like that won't do nothing for free for a lady who looks like you. I’m not blaming Lena for Edward’s crazy behavior or anything, but if she calls him asking to be saved and he drops everything just to get to her, and for her to say “Ooops, never mind,” I’d go a little nuts, too. But Edward has his own issues and his own book for that.

As for Alejandro’s “big secret,” I don’t know if I’ve read one too many Harlequin Presents or something, but his reason for not wanting a wife and kids, kind of made sense to me. He could have found a better way to deal with it, instead of torturing his poor wife with his brooding and secretive act, but I understand that he thought he couldn’t trust her because it’s a pretty big secret that could potentially ruin the lives of many people, not just his and his grandma.

I actually really enjoyed this book. The first-person POV was refreshing, the sex scenes were hot, and the hero wasn’t an all the way an alpha-hole. Oh, he had his moments, but when he was sweet to the heroine, he was adorable. Plus he sings to her in a Spanish cantina with a guitar. *melt*