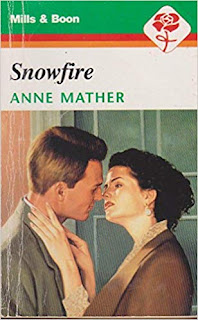 Snowfire by Anne Mather
My rating: 3 of 5 stars

Hot, young studly doctor telling your skinny, bony ass that he's been in love with you since he was sixteen and you've been the star of all his sexual fantasies? Uh, yes please!

Olivia was twenty-three years old when her closest neighbors died, leaving behind a fifteen-year-old son, Connor, who is now an orphan. Olivia was best friends with Connor’s mom and has basically known Connor since he was a baby, so she’s very fond of him. Connor wants to stay with Olivia, but of course he can’t because Olivia isn’t a relative and he has to go off with his uncle, who is his dad’s brother and lives in Florida. Connor is also in love with Olivia, but that doesn’t matter because she thinks he’s just a kid, so he goes off with his uncle and gets on with his life.

Meanwhile, Olivia gets married, but not happily because she gets cheated on by her ratbag husband and also gets in an accident that gives her a bad limp. Eleven years later, she’s depressed and wallowing in self-pity, so she decides to go back to her hometown for a vacation. While there, she visits her grandma’s old house, which is next door to Connor’s old house, just for nostalgia’s sake, and sees a young woman with groceries pull up in a car in front of Connor’s house and sees grown-up, handsome Connor coming out to help her. Just as she’s about to hurry away, she slips on her bad leg and falls down on the ground, unable to get up on her own. To her horror, Connor comes to her rescue and takes her back to his place where he takes care of her and invites her to dinner, introducing her to his hot girlfriend. Even more horrifying, Olivia finds herself sexually attracted to Connor, the kid she used to babysit and someone who is most assuredly not a kid anymore. He is a doctor now and looking at Olivia like he’d like to take a bite out of her. Of course, Connor has a bitchy girlfriend who just has to point out how old Olivia is and how nice it is of Connor to take care of one of his mom’s old friends.

Thus the relationship of Connor and Olivia develops like this: Connor tells Olivia she’s desirable and sexy and he’s always had a crush on her, while Olivia resists and pushes him away, insisting that she’s one of his mother’s cronies and that she’s too old for him. Repeat ad nauseam. Meanwhile, Olivia’s ex-husband is in trouble because he slept with his boss’s wife and he needs an alibi, so he’s trying to get Olivia let him stay with her, much to Olivia’s chagrin. He’s also there to remind Olivia that she’s old, undesirable, and that no man would ever want her. Olivia, he would like to reiterate, cannot have children and therefore, is useless as a woman, which was why he left her for a younger, hotter woman. But as it turned out, he’s having trouble having babies with his new wife, too, so maybe he had been a little too hasty in dumping Olivia and Olivia should give him another chance. The guy is scum of the earth, of course, and more than a little gross. What was Olivia thinking when she married the guy anyway?

Connor, on the other hand, is a cool guy. He works at a drug rehabilitation hospital because when he first got to London, he got into drugs a little bit and made a fool of himself with Olivia, which drove her away, so he cleaned up his act, and decided he was going to help others. He’d been in love with her since he was a teen, but she didn’t take him seriously because she’d always just thought of him as a kid and nothing more. But now he’s a man and he’s going to prove to her that he can take care of her like no one can and he’ll do a damn sight better than her douchebag husband.

Olivia is a bit of a sad-sack and mopes around a lot, but her self-esteem has taken a lot of beating. Still, she’s not a lot of fun to read about, unless Connor is around and even then she does a lot of whingeing and hand-wringing, telling him he’s too good for her because he could do a lot better than an old cripple, but then Connor shuts her up with a kiss and good-lovin’ and everything is all well and good for a while, until Olivia gets doubtful yet again of her abilities to make Connor happy.

This isn’t a true How-Stella-Got-Her-Groove-Back story because Olivia isn’t a lot of fun. She’s such a depressing character, while Connor is so sexy and hot. This is one of those rare Mills and Boon when I can actually say that the hero deserves better because otherwise, it's just a lot of boring, repetitive nonsense.